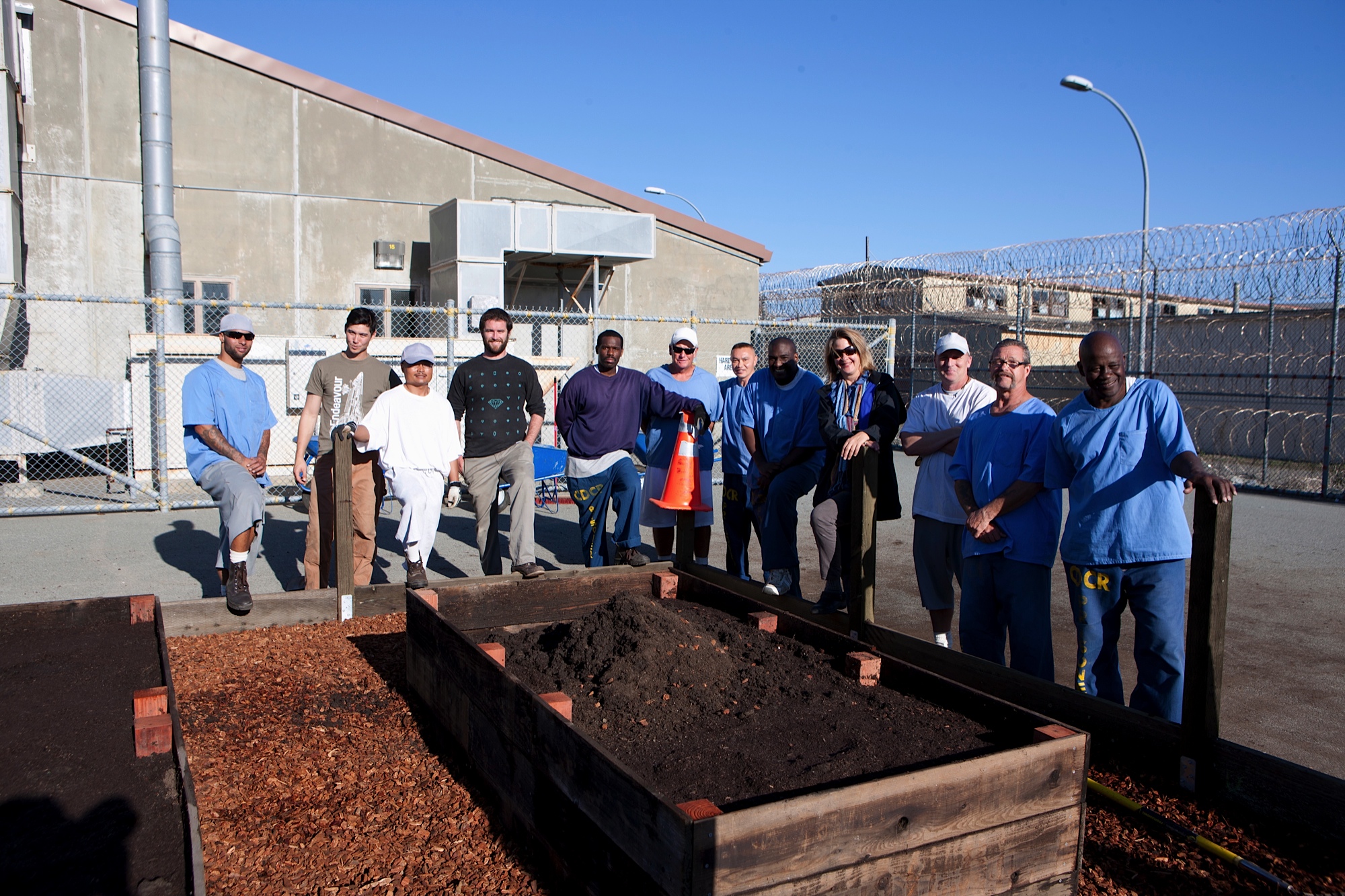 On Friday, we had our last class of 2013 with the Insight Garden Program at San Quentin State Prison. There was so much for us to honor with the men in our program – only a month prior, we had built an organic vegetable garden together on the prison yard of the medium security unit. To close up the semester, the class created an historical timeline highlighting important food justice struggles and events between 1900 and 2013. I brought in short descriptions of 12 different events and the class guessed which year each event took place. “A Tunisian produce vendor sets himself on fire and becomes the catalyst for the Arab Spring”. “2010,” one of the men answered.

“Women of the Akwesasne Mohawk Reservation launch the Mothers’ Milk Project to understand how toxic contaminants have moved through the local food chain and into mothers’ milk.” “Hmmm, around the time of Erin Brockovich, in the 90’s,” one man guesses. “2008 actually.”

“What about when the Coalition of Immokalee Workers first began organizing against fast food chain corporations for better wages and working conditions for farm workers.” – 1993.

The Greensboro Restaurant sit-ins that sparked anti-segregation actions across the U.S. – 1960. Japanese farmers lost thousands of acres of land due to internment – 1942.

Japanese and Mexican farm workers unite to launch the beet strike for better wages and contracts – 1903.

As we talk about each event, we tape its description up on our timeline on the wall. Then I pass out a notecard to each guy in the class and ask them to write down an event in their personal life or a political event that they are aware of that relates to struggles for food liberation or food injustice. Here are some of their responses:

“In 2013 the Philippines are devastated by a typhoon and food aid is slow to arrive.”

“In 1994 we moved into our first house and my mom planted her own garden.” “In 2008 I was locked up in San Quentin and forced to eat this horrible over cooked processed food for six years.”

“1996 was the first time I had gone to a pumpkin patch to pick out a pumpkin with my daughter.”

“In 1995 there was a patent on soybeans, and big corporations sued farmers for growing soybean crops – how is it possible to patent this when the soybean was created by nature not man?”

“In 1984 the Eatery Doggie Diner in Richmond, CA was closed down in order to make way for a McDonalds.”

“In 1982 after killing and processing two chickens, my grandmother gave me a lesson on food production and food sovereignty.” “I can remember when I was a little boy, my grandfather grew most of the food we ate.” As 2013 comes to a close, we took a moment in class to honor all the struggles people had gone through before us, and how much work we still have to do in the food justice movement. The young vegetable garden sitting between the chow hall, dorm 5, and the sally port on the prison yard at San Quentin carries a lot of meaning for the guys participating in our program while they are imprisoned at San Quentin. The watch tower looms above, but behind that is Mt Tamalpais – a sacred mountain that the sun sets behind each day. To build this garden, the men had broken up the asphalt in the prison yard, used power tools they hadn’t gotten their hands on in years, and gently placed organic plant starters into the rich dark compost we had moved into the raised beds. It was obvious that this garden had an impact on everyone who took part in building it, but it seemed to me that it also impacted the corrections officers who watched closely as we worked together – perhaps opening their hearts and minds to the possibility of change.  These men work in prison for wages less than 13 cents per hour and when they are released they struggle to find employment and re-enter into society. The recidivism rate in CA is more than 60%, meaning that within the first three years of re-entry, 60% of people return to prison. In the past three years, Planting Justice has been able to employ 10 men who have returned home after being in prison at San Quentin and participating in the Insight Garden Program. There is so much more to be done to change the unjust legal system. Our last class of 2013 with the Insight Garden Program was a small step in honoring the struggles of those who have come before us and gaining inspiration for the work ahead.