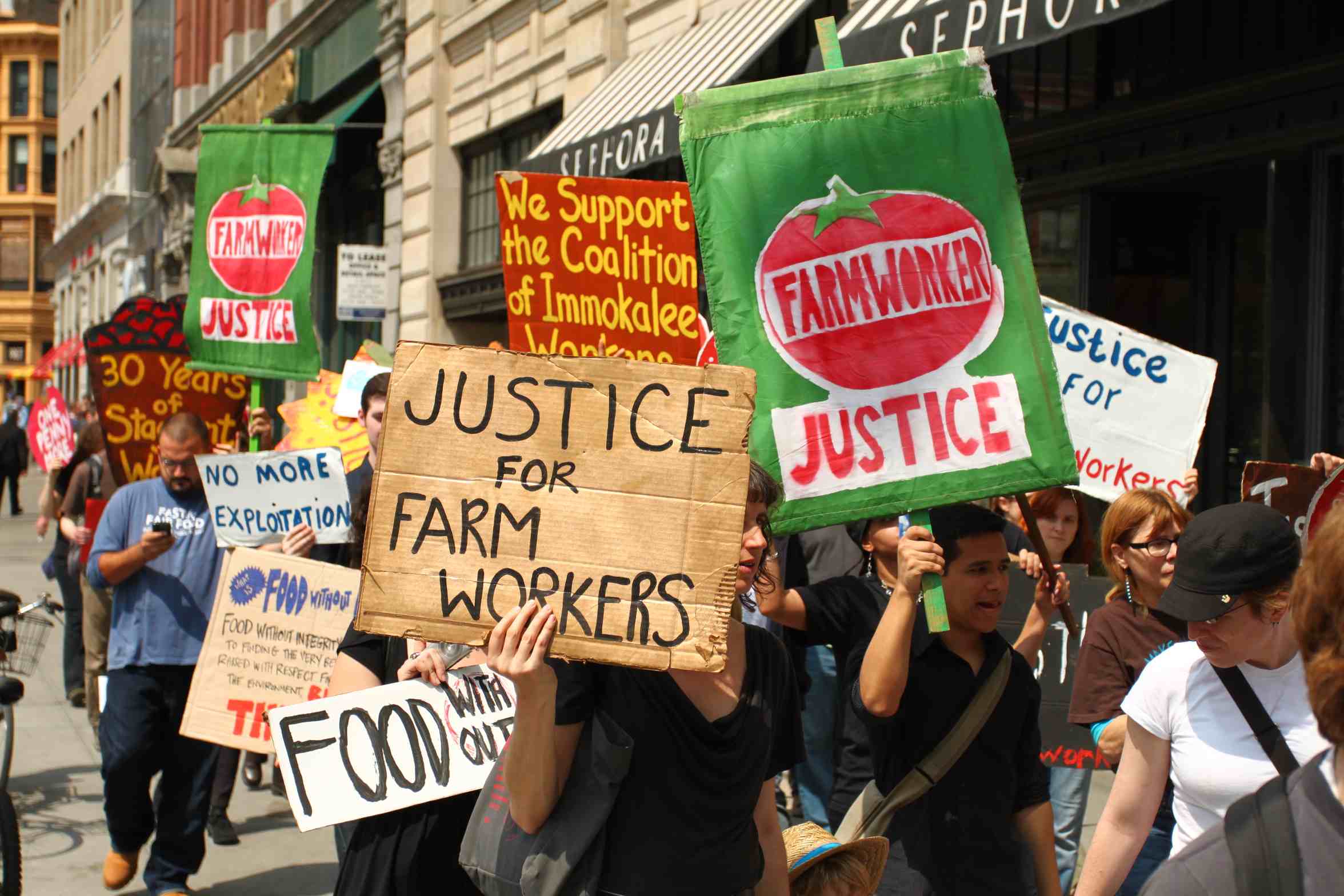 On October 16, the Coalition of Immokalee Workers (CIW) came to New York to receive the Roosevelt Freedom from Want Medal that recognizes their accomplishments in fighting for human rights and places them alongside past honorees including Wendell Berry, Nelson Mandela, the Dalai Lama and Aung San Suu Kyi. Starting today, they are launching a week of action to move Wendy’s to sign onto an innovative and successful social responsibility program. Soon after last month’s award ceremony, the workers were back on the job while leading a march and picket outside of the Wendy’s by Union Square, alongside food justice allies including Dessalines Brigade/Via Campesina (Haiti), Basque Country Peasants’ Solidarity, Coordination of Peasant Organizations (Mali), the Tamil Nadu Women’s Collective (India), ROC-NY, WhyHunger, the Brooklyn Food Coalition, the U.S. Food Sovereignty Alliance, the Food Chain Workers Alliance and several other supporters. 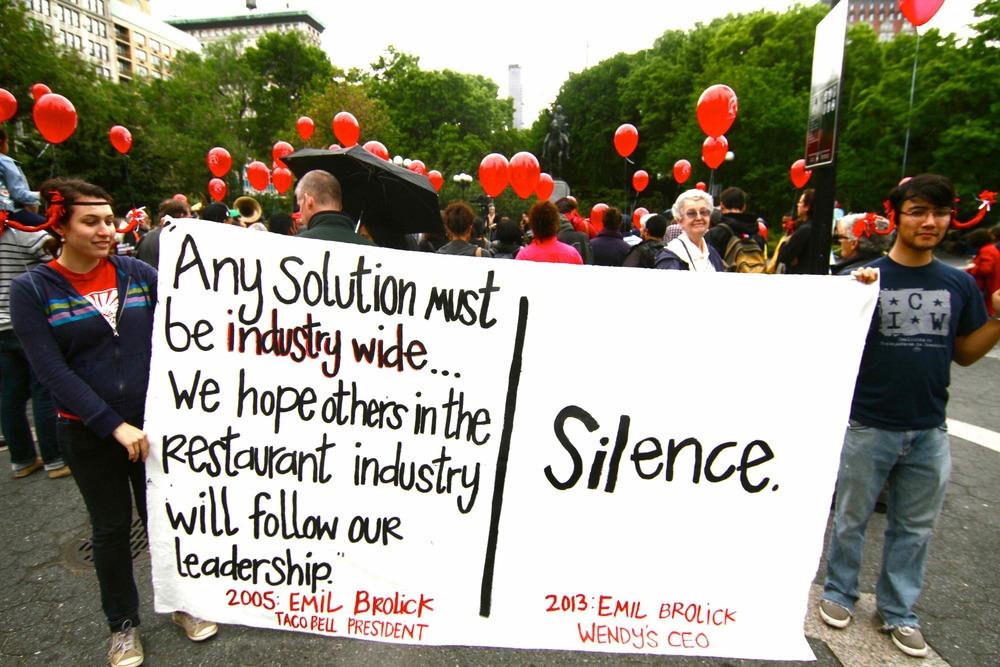 The demonstration put more pressure on Wendy’s to join the Fair Food Program(FFP), which has brought farm workers, Florida tomato growers and leading food corporations together to agree to a code of conduct that protects workers’ rights and payment of the “penny per pound” premium. Wendy’s is the last remaining holdout among major fast food corporations; eleven other major retailers have signed onto the program, including McDonald’s, Subway, Burger King and Taco Bell. The Fair Food Program is based on a handful of main elements: increased wages, a code of conduct with a zero tolerance policy for forced labor and sexual assault, a worker-to-worker education program on their rights, a complaint resolution mechanism, health and safety committees and ongoing auditing of participating farms to insure the practices are being followed. The program does not hesitate to drop growers who are found in violation of the code of conduct, which would make them ineligible to sell to the participating companies. Across the state of Florida, 90 percent of growers participate in the program, enough to set the standard for better conditions for farm workers across the industry. 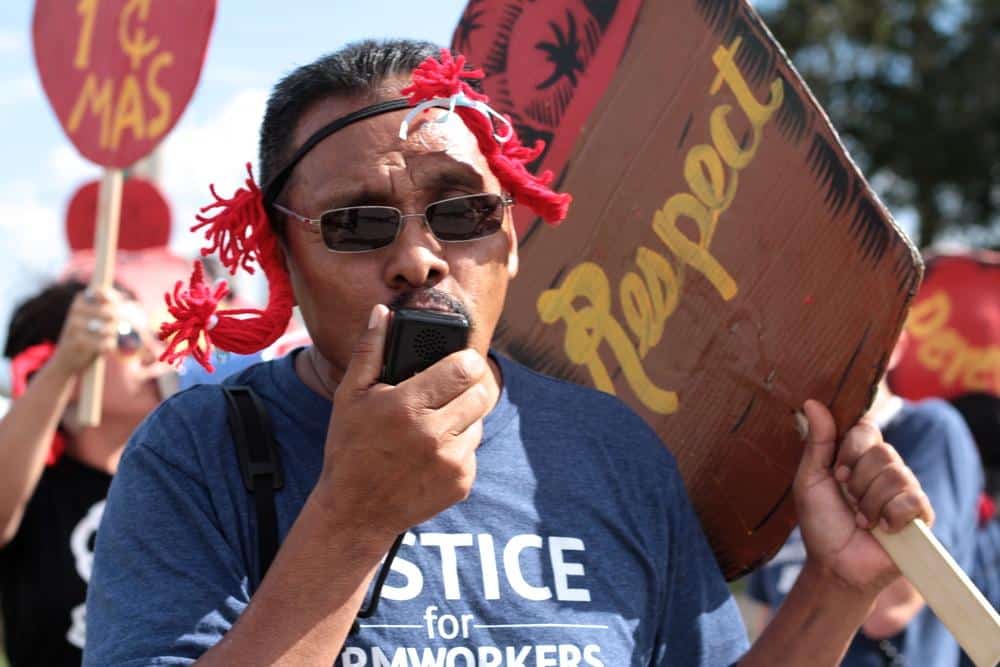 Farmworker Nely Rodriguez has seen the FFP change the conditions in the fields. In particular, before the program, nobody paid attention to the issues that women faced in the field, especially the flagrant sexual harassment many women laborers experienced. Now, with education programs and the zero tolerance policy, workers feel comfortable reporting those abuses and confident that they will be addressed. Rodriguez remarked that before, “our dignity was denied to us through the abuses we faced.”  Now with the FFP in effect, “finally, justice is served at the workplace.” As Wendy’s continues to stubbornly keep themselves stuck in the mud, the CIW is escalating their campaign with this week’s events. The weeklong series of events coincides with Wendy’s own Founder’s Week, which is their celebration of the late founder Dave Thomas’s corporate values, such as integrity, respect and responsibility. The marches, letter deliveries and protests that are being organized by the CIW in cities across the country will highlight the inconsistencies between Wendy’s professed values and their refusal to join the FFP. “We find it incomprehensible that they are doing this while they have yet to sign onto the Fair Food Program,” says Rodriguez. 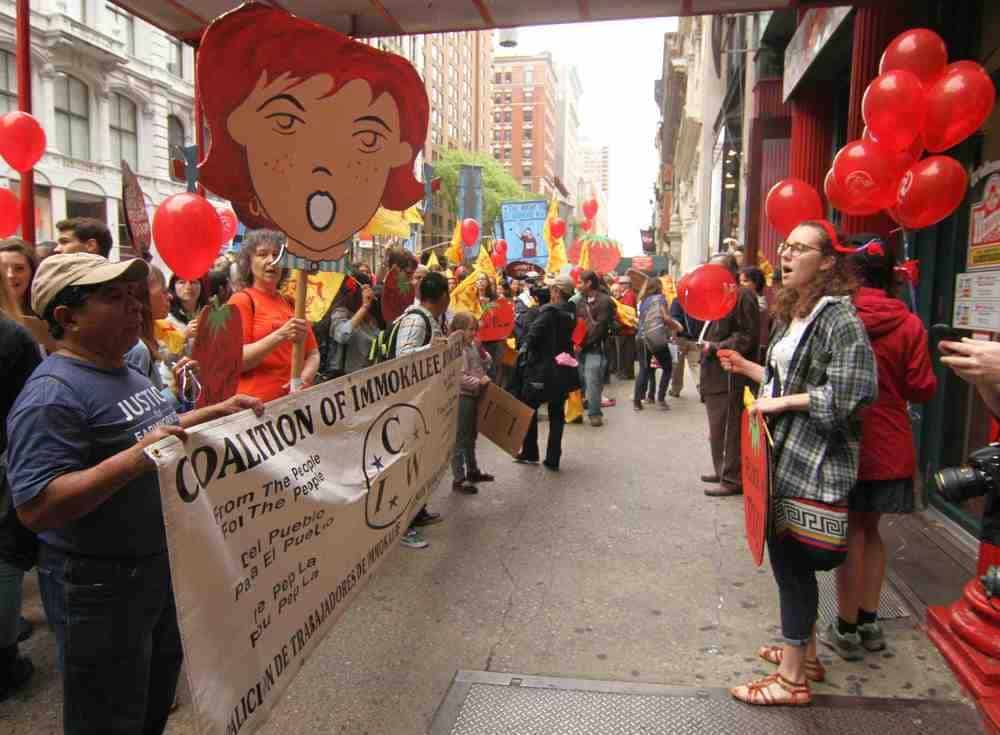 The tragic irony is that Emil Brolick, the CEO of Wendy’s, was the president of Taco Bell when it became the first fast food chain to sign onto the Fair Food Agreement. He proclaimed then that Taco Bell was leading the way toward solutions in the fast food industry and that “We hope others in the restaurant industry and supermarket retail trade will follow our leadership.” Now, at the helm of Wendy’s, Brolick’s words feel cruelly insincere. Rodriguez says that their recent recognition by the Roosevelt Institute, as well as other honors from the White House and the United Nations, underscores the fact that the FFP “is the future, the only way forward.” She continues, “Wendy’s faces a choice: to be the last holdout of major fast food corporations or to join the others that have already signed on.” Despite Wendy’s claiming that they already follow guidelines for purchasing from fair growers, it’s not enough for Rodriguez. “We need them to commit to the program so that we can ensure they only buy from the participating farms and stop buying from farms that abuse their workers. That’s the only way we can ensure that they do this, words are not good enough, we need them to commit.” 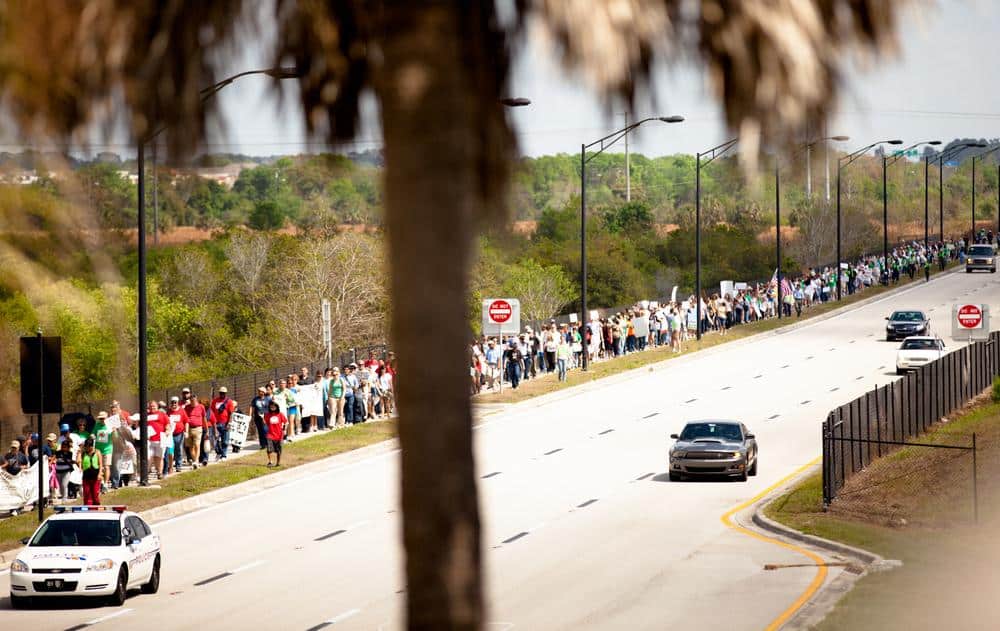 Throughout the campaign for Fair Food, the CIW has worked very closely with ally organizations to amplify their struggle beyond the fields, especially theStudent/Farmworker Alliance, Interfaith Action and Just Harvest USA. The SFA gained a lot of attention when it organized students to kick fast food vendor Taco Bell off university campuses until they participated in the FFP. 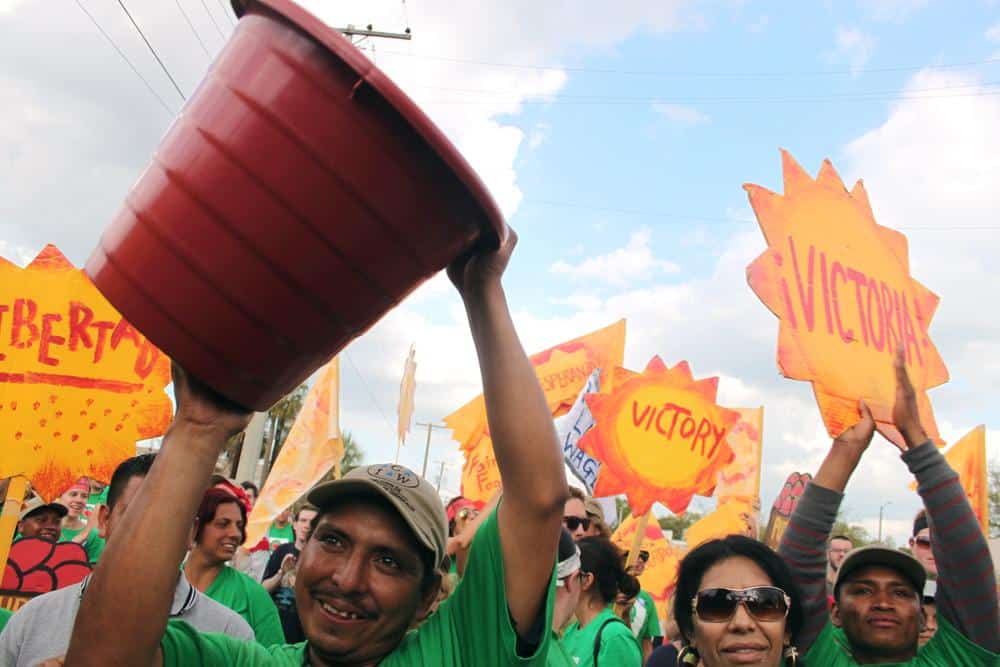 Jake Ratner, the national coordinator for Just Harvest USA, stresses the importance of a more comprehensive and inclusive movement for sustainable foods. Although it is extremely important to find alternatives to industrial agriculture that are more sustainable, Ratner says that we cannot ignore the conditions faced by workers who pick the food for the overwhelming majority of our country’s food system. He says, “we have an obligation to work together with farm workers in partnership, in order to change all aspects of our food system at the same time.” 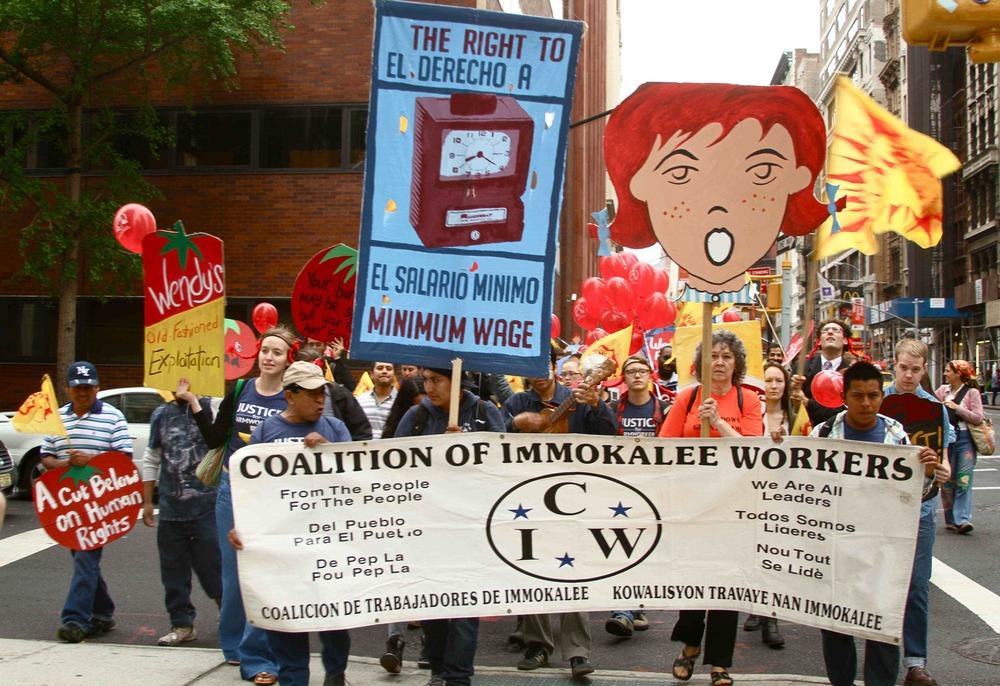 Rodriguez says that sustainable food advocates often pass over workers’ rights when considering a more sustainable food future. However, she says “if you want to have sustainable foods, it can only be possible through respecting farm workers.” She adds that while it is extremely important that all people take a stand on these issues, “it is necessary for the workers themselves, who before didn’t have a voice, to be leading the way for these fights.” If you’d like to know what’s going on in the New York City area during the week of action, check out the CIW webiste or contact Community Farmworker Alliance at farmworkersolidarity [at] gmail [dot] com.

← Prev: Statement from Council of Elders, Caretakers of Mother Earth Next: "Starting with a Shovel" - A Personal Path Towards Food Justice by Wiley Rogers →