A few weeks ago, the Senate voted against raising the minimum wage to $10.10 an hour. The vote came after heavy lobbying by economically exploitative corporations and their trade group representatives. Although the bill did not pass largely because of Republican opposition, consider that Democratic Arkansas Senator Mark Pryor voted against the bill. He represents the home state of Wal-Mart, the largest grocery retailer on the planet. Beyond pressuring food suppliers and distributors to achieve Wal-Mart’s famous low prices, which results in the exploitation of labor throughout its food supply chain, the company mistreats its own retail workers.[i] Consider also that the federal tipped minimum wage has been $2.13 for 22 years. The day before the vote in the Senate, the National Restaurant Association was busy lobbying our representatives to reject abolishing the tipped wage, thereby maintaining the lowest paying jobs in the United States. Despite the social and biological importance of food, most food chain worker’s remuneration provides no economic stability, let alone mobility. 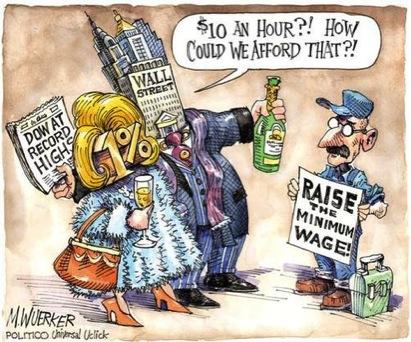 All this comes at a time when there is a growing gap between the wealthy and everyone else.[ii] Historical and statistically systematic evidence also suggests that capitalism necessarily produces such inequality. The rate of return to capital outpaces overall growth, which in turn means that inherited wealth grows more quickly than earned income.[iii] Relatedly, the (super) rich are pulling away from everyone else, taking along with them greater levels of the economic value produced by middle and working class people.[iv] Before the empirical evidence started mounting, activists taking to the streets across the world – in Madrid, Athens, New York, Montreal, Buenos Aires, Santiago, Cairo, Tunis and elsewhere – were collectively experiencing, and therefore participating, in a global uprising against political corruption and the crises of capitalism. 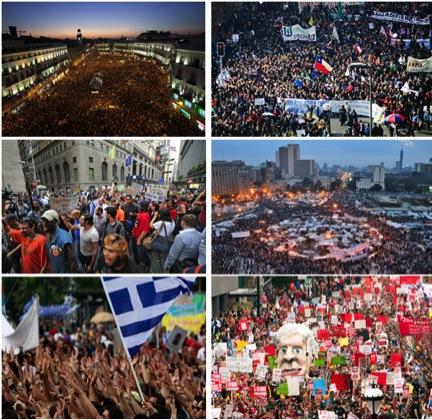 Why does this all matter?

In the context of the current food system, families like the Walton’s are able to leverage greater political power by lobbying Congress with large sums of money. With recent Supreme Court decisions making it easier for money to buy political power in Citizens United v. FEC and McCutcheon v. FEC, our food systems in all their ecological and social complexity are at risk of greater control by wealthy people and the corporations they run and own. While prefigurative experiments are important, direct collective confrontation with systems of power is required to advance the interests of the growing pool of us with fewer resources.[v]

The alternative food movement wants ecologically and socially sustainable food systems, so where is it branching out beyond the comfortable spaces of organic food production and farmer’s markets to ensure widespread economic justice?

The configuration of the current political economy rests on exploiting most of the roughly 20 million food chain workers in the United States. Such workers constitute one in five private sector jobs and one in six jobs overall.[vi] Of these workers, 57% work in the food service sector, 13% in grocery retail, 8% in distribution, 7% in processing and 15% in production (i.e. farmworkers).[vii] Such work is becoming more common in the wake of the Great Recession. Higher-wage and mid-wage jobs account for 79% of all lost jobs resulting from this capitalist crisis, while 58% of the recovery growth is in lower-wage jobs. Two of the ten lower-wage jobs with the biggest recovery growth are food chain workers, who also happen to be the lowest paid workers.[viii] Moreover, in recent years corporate profit margins hit an all-time high, while wages as a percent of the economy hit an all-time low.[ix] Despite such dire circumstances, food chain workers are rising up as well to confront economic inequality. For example, Wal-Mart workers, fast food workers, and farmworkers are demanding living wages, benefits, and workplace respect. 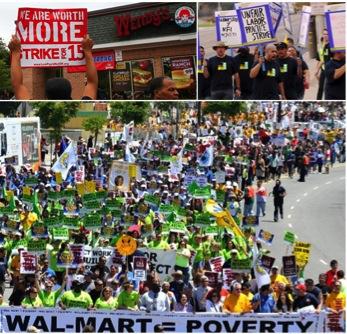 With all this in mind, it is noteworthy that there is evidence of a growing convergence between parts of the labor movement and parts of the alternative food movement. Last week, with much of our political class rejecting basic subsistence level wages in the face of overwhelming public support, many alternative food movement and alternative labor organizations publically declared their demand that Congress stop taking money from the National Restaurant Association.[x] Included in this list are major alternative food movement leaders and organizations such as Community Food and Justice Coalition, Food & Water Watch, and National Family Farm Coalition. Planting Justice also lent their support to the campaign. This convergence has the makings of a more concerted effort at cross-movement building. If successful, it would bridge the interests of those setting the foundation for new economically viable and sustainable food models with those confronting the forces that treat food workers as disposable.

We are in the throes of increasing economic inequality. The alternative food movement seems finally to be linking with labor struggles in the name of economic justice. We all work. We all eat. We all interact with food workers, whether organic farmers or fast food workers. 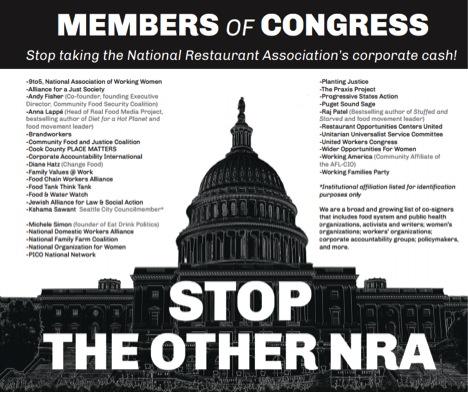 [ii] Emmanuel Saez. 2013. “Striking it Richer: The Evolution of Top Incomes in the United States (Updated with 2012 preliminary estimates).”

[v] This has long been the argument of people such as Frances Fox Piven and Grace Lee Boggs.

Frances Fox Piven, and Richard A. Cloward. 1979. Poor People’s Movements: Why They Succeed, How They fail. Random House.

[vi] Food Chain Workers Alliance. 2012. The Hands that Feed Us: Challenges and Opportunities For Workers Along the Food Chain. Los Angeles, CA.