As We Say Goodbye to our Smiling Giant… 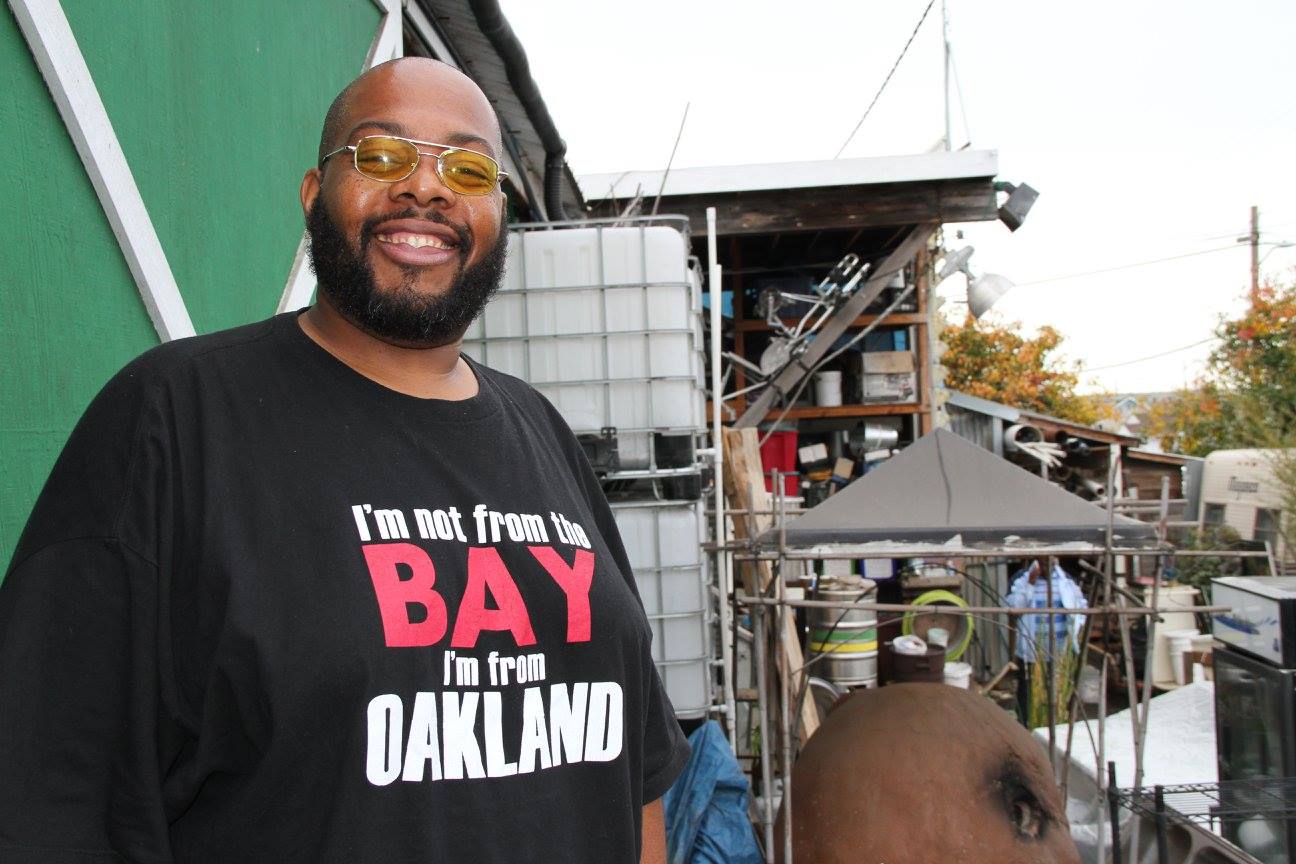 Siddiqqi was born on April 25, 1972 and raised in Oakland and found his way to Planting Justice through his lifelong friend Darryl. “He called me Unc’, because I’m 15 years older than him, we did everything together, lived together, walked those streets together.”  Darryl connected with Planting Justice through Insight Garden Program at San Quentin. Insight Garden Program goes into prisons and develops the “inner” garden of the mind, while giving participants an opportunity to get their hands in the soil and tend to vegetable gardens.  The one at San Quentin was created in partnership with inmates and Planting Justice. Beth Waitkus, founder of Insight, writes that Siddiqqi was “one of our most engaged participants. He always had an optimistic attitude and positive outlook on life and was a joy to be around. He was a treasured graduate of the program and had one of the biggest hearts (and one of the greatest bear hugs) I’ve ever known.”

This connection with Insight Garden Program and Planting Justice  (90 days before his release from San Quentin in early 2014) provided a pathway that would support the changes he’d made in his heart, mind and body for the healing of his soul. “He had become a Muslim,” Darryl tells me over the phone from his home in Antioch, the Sunday after Siddiqqi’s transition, “and he was doing a whole bunch of  praying and a whole bunch of meditation, trying to figure out what he was gonna do when he got out. He got out before me and when he got out, he got the job with Gavin and Haleh and they are the best people to work with because you know, we used to working in institutions and they were good to be working with on the outside to make sure you okay. He was telling me how great it was and he couldn’t believe the people he’d hooked up with, they were real, the job was real and it wasn’t the regular job where you just a robot, you’re friends and you’ve got all these resources and you’re working hard, feeling good and feeling free. I was so excited to get out, he was sending me letters about it, I was dreaming about the job and getting out,  Haleh told me, “don’t worry, I got you” and sure enough, when I got out, I found everything he was saying was true.” 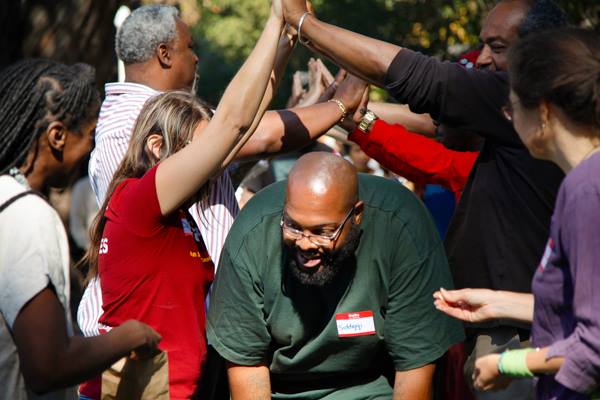 Siddiqqi at his Pathways to Resilience Graduation Ceremony.

“Siddiqqi’s first day on the job was March 19th, 2014. We were out
at Dig Deep,” Gavin Raders, Co-Founder and Executive Director of Planting Justice tells me in the backyard of his house, the Saturday after Siddiqqi’s passing.  Gavin’s clear, expressive eyes are soaked in the sadness and shock of losing a friend, mentor and colleague unexpectedly. “That first day, we were setting gopher cages and planting trees. I remember him being like “I never realized the scale of what we have the opportunity to do out here.” We were working right alongside Camp Sweeney, that meant alot to him and the scale of what we were doing at Camp Sweeney and in the community that he was from. He was so lit up about it…it was the perfect thing for him to be doing in the way that he saw himself. He was clear about what his personal mission was from the first day he got out.

We took a walk the last time I saw him. We were by the office. I didn’t know that he wasn’t feeling well. We talked about health and other issues in the community. He talked about how he and Darryl sold drugs in those communities and how when they got out they wanted to be there for their families. Siddiqqi’s faith…Islam; getting sober; it all changed his life and taking care of his daughters and he used that metaphor about putting poison in the street and making up for it by planting trees and growing healthy food. 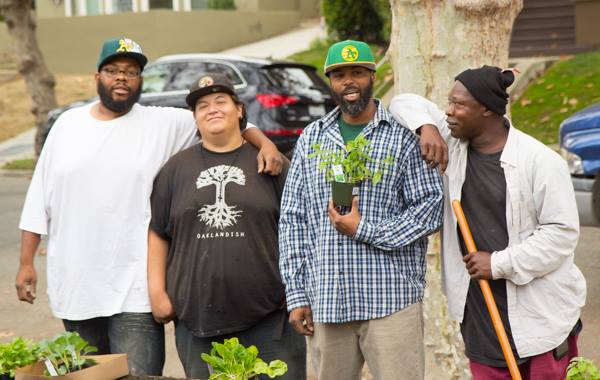 You learn a lot working side by side with somebody, four, five, six hours a day planting trees and we talked a lot. It was joyful working alongside him. He developed a relationship with the farm at El Sebronte and was so excited about the long term potential.  He wanted to build an amazing place for people so they could build these amazing relationships to nature and he was really passionate about being a farmer. He was in it for the long haul, it was what he wanted to do for the rest of his life. He was really committed to the work and really brought such a generous spirit to the work. He really, really enjoyed the work so it made it fun being around him…doing it.” 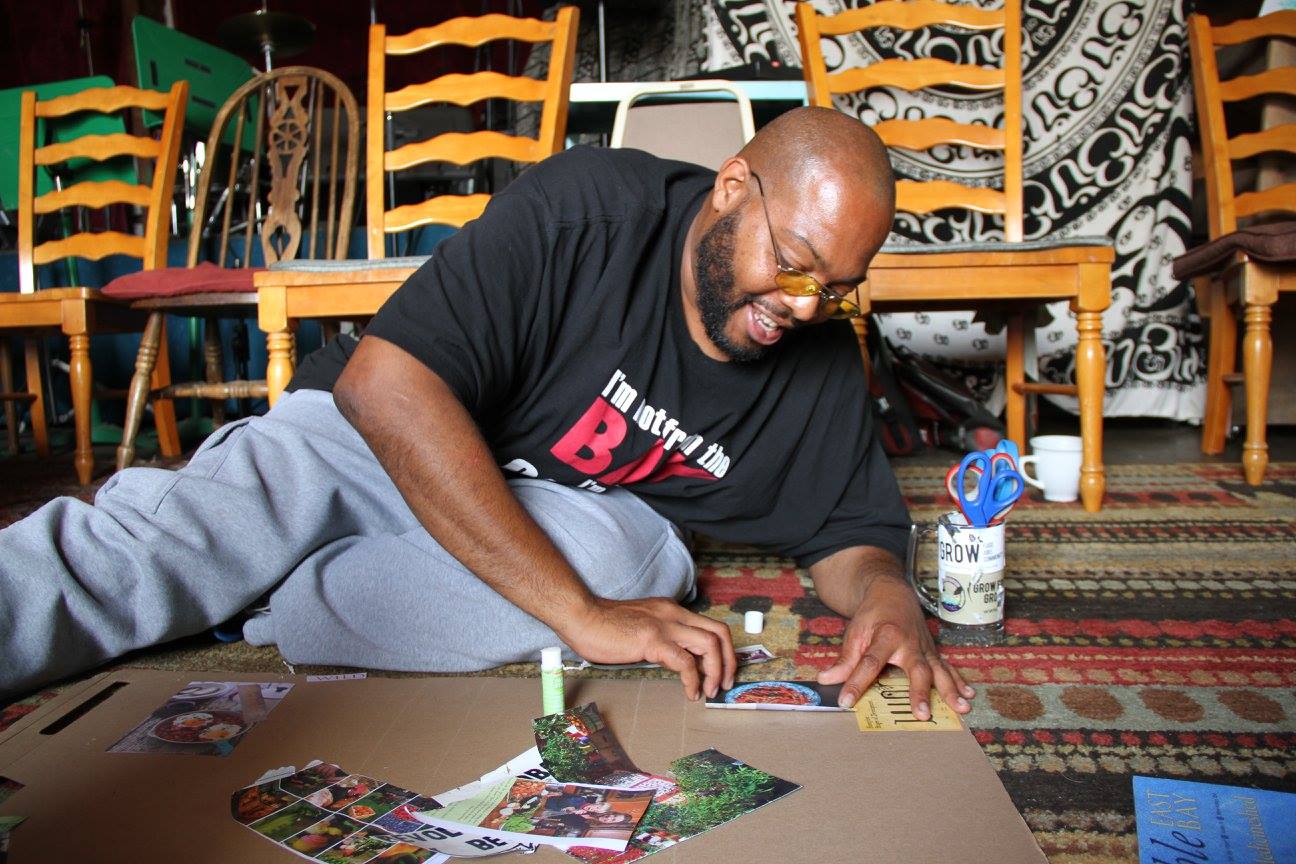 Siddiqqi working on our Planting Justice “2016 Vision Board” at our December 2015 Staff Meeting. 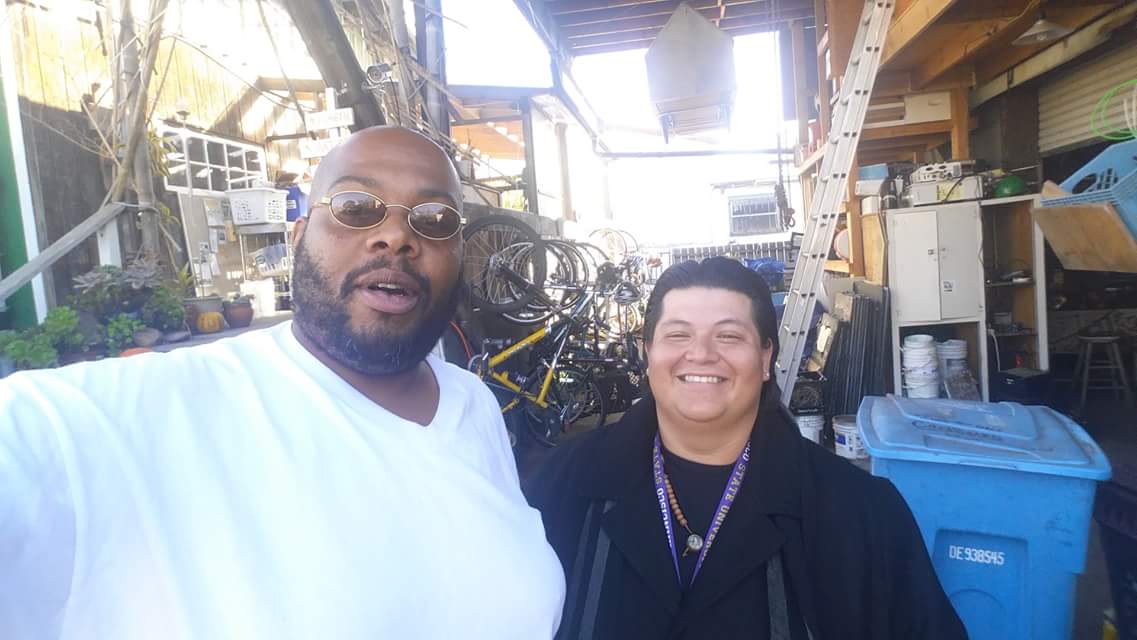 Siddiqqi with Salvador, who he called his “mentor.”

In October of 2015, Siddiqqi had an opportunity to represent this transformation and his commitment by speaking on a panel at the Black Urban Farmer’s conference held here in Oakland. The name of the panel was “Farms Not Prisons.”  When met by critics in the audience who suggested that farms like the one at San Quentin replicated slavery, Siddiqqi had this to say, “I’d taken enough from my community in my other life, it was that garden that prepared me to give back and I love being able to give something back in the form of planting fruit trees that my daughter and her children and children’s children will nourish themselves from. Future generations will eat because of our efforts and that feels good.”

As a writer and a recording artist The Notorious BIG found a window of escape through his art. He hopped through it. For others in the same situation, that window is often a dead end, leading to drug addiction, early demise and or incarceration…the latter yielding estrangement from family and friends and community and loss of self-identity. Siddiqqi found a window with a pathway that led him back to his community as a whole being. We all pray, he is experiencing an eternal spiritual peace and an acknowledgement of his accomplishment as a contributor to a better world, down here on earth.

This morning as we come to understand that he is no longer here with us on earth, we are also thankful that he spent his last years with us, working the land, preparing her for future generations, speaking out his vision of a bright and bountiful, abundant future for all of earth’s children and her communities that struggle for peace, equality, justice and balance.

We love you Siddiqqi and we thank you for your creative contributions to our work at Planting Justice. Thank your for that beautiful boyish smile, your pride, your mischievous humor, that giant beautiful bear hug, your immaculate heart, your humility and the blueprint for the lush, green future of all God’s children.

Our Smiling Giant…we will love you forever and ever as we journey forward out into these devouring streets that will become food forests to be devoured…with you in our hearts. 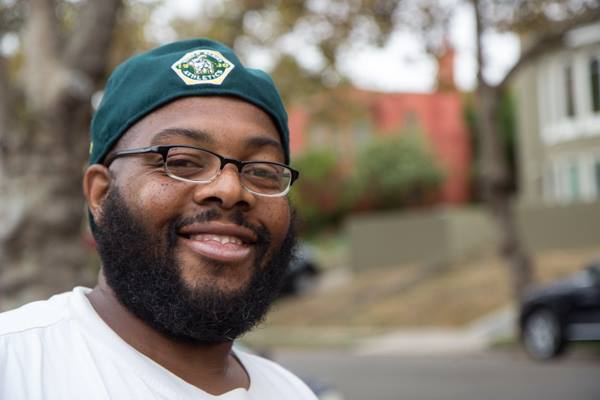 We love you, Siddiqqi. Rest in Peace & Power.

Your Brothers and Sisters at Planting Justice

← Prev: Occupy the Farm Disrupts Construction on Gill Tract and Inauguration of Sprouts Next: Smile →