Haleh Zandi, Planting Justice’s co-founder and Director of Education, shares her take on fighting for social change, creating a spirit of community, and creating sustainable food systems in her interview with Awakin‘s Fernando Grajeda. Read the original article and listen to the audio here!

From Anti-war Organizing to Building a Sustainable Food System

Original Content from September 29, 2014 by Fernando Grajeda at Awakin.org

FIGHTING AGAINST MEGA ISSUES FOR HUMANITY

Haleh Zandi is an inspiration figure who transitioned from feeling disempowered and frustrated as a result of her anti-war organising struggle to feeling fulfilled by instead channelling a creative solution to an issue close to her heart: food injustice. Her journey started whilst doing a lot of door to door organising and talking to people about increasing militarisation of the Middle East during the Bush years as her family came from Iran. Her tactic and strategy was to lobby people in Congress to make sure that the US didn’t go to war with Iran, to end the war in Iraq and Afghanistan and to decrease its military presence in countries around the world. With that work, Haleh felt very disempowered and very depressed. In her own words: “I felt like my sphere of influence was not effective and so I started to look at the food justice movement in the Bay Area which was really vibrant and diverse”.

In this Awakin Call, Haleh shares how listening to an interview of a woman from South East Asia who had come to the US as a refugee during the war in Vietnam changed her life. She was shocked to hear this woman saying that the pesticides in the fruits and vegetables she was eating in California were reminiscent of the chemical weapons she was exposed to in the refugee camps. In other words, these woman was saying that these chemical pesticides used in food were actually the same chemicals used to make bombs. Haleh continued researching about this topic, and learned through reading Michael Pollan and other writers, that after World War II the chemical weapons industry funelled through Congress to start having chemical fertilisers and pesticides made of ammonium nitrate. The realisation that the chemicals used to make bombs were also sprayed in our food and that this was in turn being fed to children inspired her to start building a local and sustainable food system. 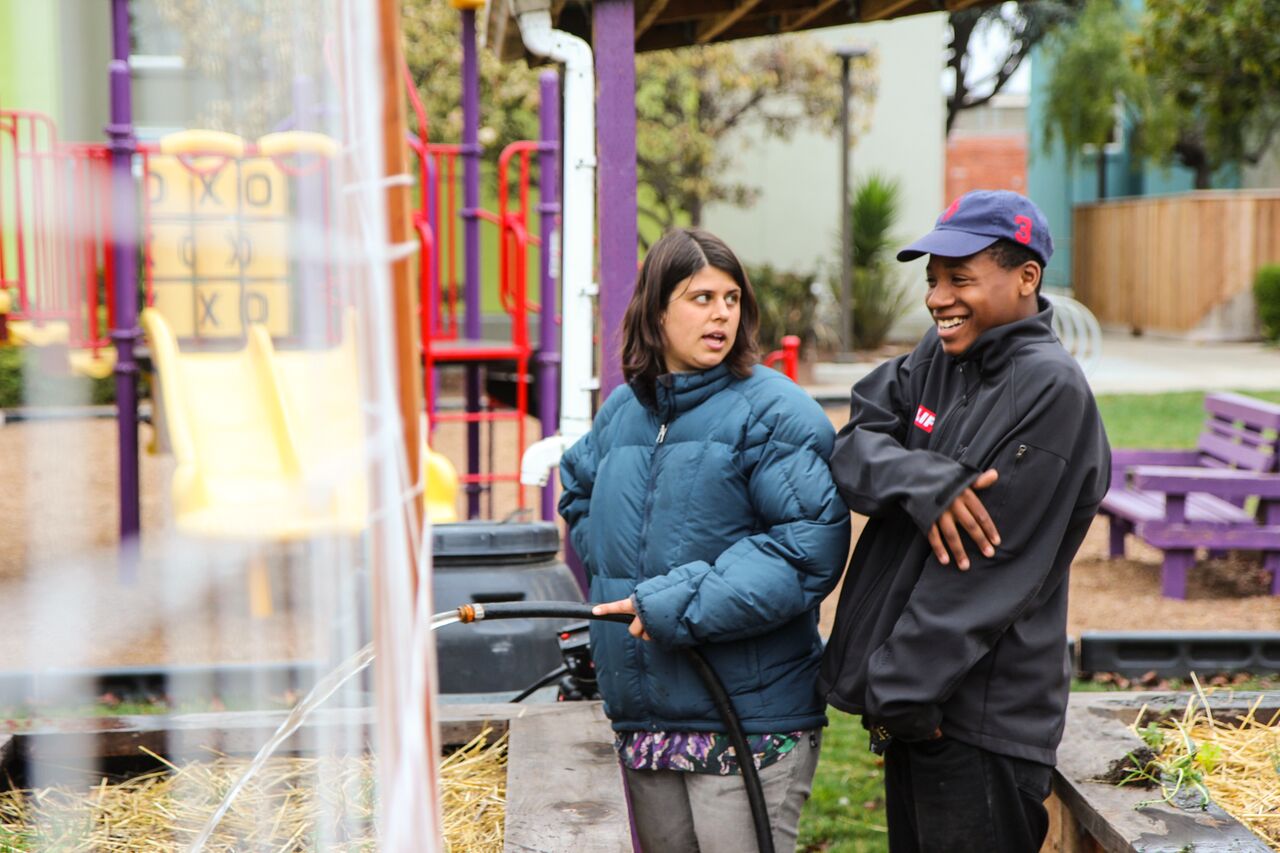 Haleh waters one of Planting Justice’s urban gardens with Tylen, a member of the organization’s Education team.

CREATING A SPIRIT OF COMMUNITY THROUGH A SUSTAINABLE FOOD SYSTEM

This time around she focused on finding a solution rather than on ravelling against the problem. In her vision, a localand sustainable food system that used organic methods was going to be able to build community and create local green jobs which in turn could help the US alleviate its dependence upon fossil fuels and therefore have an effecton the need to militarise the Middle East. Taking all of these variables into consideration, Haleh and her partner Gavin Raders, funded Planting Justice with the aim to use food justice as a way to work on the interconnected issues of economic, environmental and social justice.

In the last five years Planting Justice has developed four main programmes around food justice. The first one being a landscaping service for private residents. This NGO is transforming the front and back yard’s of homes for full paying clients and are also subsidising the costs for low income households so that they also have access to this service.

The second programme focuses on education awareness. Planting Justice has been working at San Quentin State Prison with the Insight Garden Program, at Santa Rita Jail, and Stanislaus County Juvenile Detention facility. Not only have they given hope to the inmates in these prisons, but what is more inspiring is that Planting Justice also creates green jobs for people who have been part of the educational programming at the San Quentin and Santa Rita jails. Planting Justice hires men in re-entry from prison and jail onto their landscaping pins at an entry level wage of $17.50 per hour to demonstrate that wage green jobs can be created for people with barriers to employment. Haleh says the aim of these two programmes is “to be able to build and develop a local sustainable food system that would create green jobs because when you look at the employment sector across the US at a Federal level, farmers as well as domestic workers,have the highest rates of poverty and the lowest incomes”.

The third programme aims to intervene on this non-profit industrial complex by doing grassroots fund raising. This canvas programme includes five full time people out on the streets raising awareness on food injustice. Haleh says that “whether they’re outside of a grocery store, a farmers market or places where people are having lunch, they’re talking to people about food justice issues”. Their aim is to find new landscaping clients and getting small donations on the streets. They ask people to donate just $5 a month so that these donations help to alleviate the dependence upon foundations and create a more sovereign organisation to really work on the issues that are social justice related and not have to limit their programming based on grants or foundations but really do the work that the community wants them to be doing.

The fourth programme is an urban farming training centre on a side acre farm in El Sobrante, which is about ten miles east of Berkeley. In El Sobrante, Planting Justice has five acres of land in which they have built an urban farming training centre where they can demonstrate permaculture through design techniques. It has a sight to host for people re-entering society after incarceration and to bring students out from high school to spend time on the farm and learn the different skills around producing food, harvesting, processing and distribution.

This food justice movement has inspired many people around the Bay area and even abroad. The last five years of hard work have shown Haleh that “the changes that we can make can be on a structural and systemic level and we need more people to get involved. Yes, there needs to be support from the government, but we can do it. Rather than feeling disempowered and working really hard and feeling tired, at least I feel like my influence is effective and impacting the lives of people around me as we’re building those foundations for the movements to make the changes”. 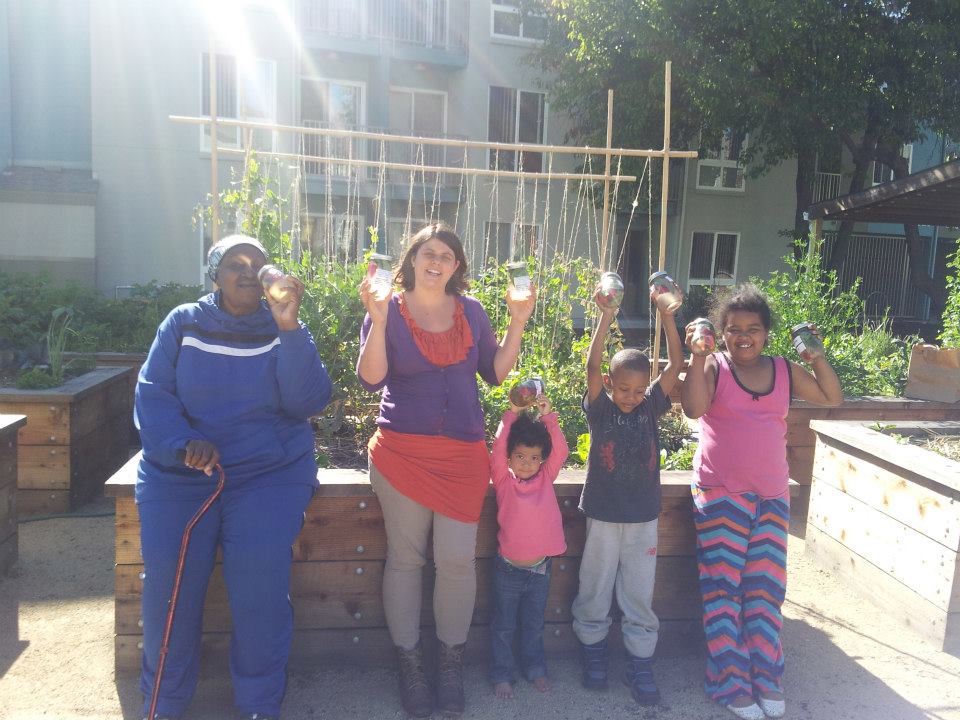 The experiencesshe has gone through in the past five years doing this work and the huge changes that she has seen on such small levels, have allowed her to feel that the impact they’re having is much greater than any of the anti-war organising that she was doing before. In her own words, “this is because I see the changes in personal lives and I see the way that our programmes can really demonstrate on a much larger basis”. Planting Justice currently employ 22 people. They have been able to offer employment to 11 men in re-entry and to two youths who graduated from high school who are currently holding leadership positions.

Haleh says that it has been an incredible experience to see the way that this work has transformed people’s lives: “when our men are re-entering from San Quentin, some of them had been in there for 25 years, institutionalised in different prisons and when they re-enter and return home with their families there is a lot of changes and coming back into the household there is power struggles to figure out. The women have been leading the household for many many years and so coming back and within the same week of being released being able to have a job and bring in an income is huge for their families”.

However, one of their biggest challenges that their men face is homelesness upon release if they don’t have any family to stay with. Planting Justice also helps them find transitional housing in different shelters because they are aware that being on the streets is very dangerous and it is really easy for people to have to go back to prison when they’re living on the streets.

Haleh is very positive about the future of these food justice movements which are taking place around the world.“I really have a lot of hope for what the future is going to bring. We’re getting pushed up to so many barriers around climate and economy and it’s apparent to so many people that changes need to be made and so I’m just going to keep my hands in the dirt, my feet on the ground and keep my voice loud so it can be heard around the world and I think these changes will come on a structural and systemic level”.

This conversation with Haleh ended with a question about how she is able to keep on the momentum and wake up every morning feeling the motivation to face a new day in her inspirational journey. Her response was that her motivation resides in keeping the spirit of the community alive. “There is so much medicine in food that when I’m tired and exhausted and feel overwhelmed by the amount of work we have ahead of ourselves, I have someone on my team who gives me a nice refreshing spray made of rose water or brings me a cup of tea. We heal each other through this work and that’s what really keeps me going”, Haleh says with a genuine tone of gratitude.

Stay up to date with Haleh and the rest of the PJ Team: Subscribe
← Prev: Rebirth: Perspective From Eric Villanueva of the Chippewa-cree tribe Next: Reflecting on Independence Day and Incarceration: Watch the Freedom Chronicles →