Go behind the scenes of Planting Justice with Otis Spikes, site leader at Planting Justice’s Rolling River Nursery in East Oakland. Otis grew up in Sobrante Park and has lived in the neighborhood for the past 38 years. He enjoys working at the nursery to give back to his community. Read more about his inspiration and story in the full interview below! 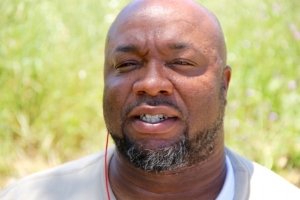 Q: Hi, please say your name and the work you do with Planting Justice.

Otis: Hello there, my name is Otis, I’m with the nursery crew, and I’ve been with Planting Justice…two and a half years almost, now.

Q: What’s your favorite part about working with Planting Justice?

Otis: My favorite part of working with Planting Justice would be seeing the people appreciate the variety of plants when they get they plants. That’s gotta be the best thing for me. Especially when they get a plant they ain’t seen ever, or can’t find nowhere in the world, they do backflips about it when they get it. That’s my favorite part about working with Planting Justice. I can’t really say enough about it, there’s so much stuff. I’m talking about farms, working with the neighbors, farms working here…It helps me be a better man. I mean like, a way better man than I was two and a half years ago. I’m still workin’ on myself but you know. Since I’ve been here, I’ve been changing. I’ve been trying to change, you know – it’s possible, you know what I mean?

Q: Who or what motivates or inspires you to do the work that you do?

Otis: You know what inspires, or motivates me to work? My kids. My son. My son, like, he’s what, eight? So he’s been around these plants two years now – two and a half years, since I’ve been here. He’ll come out and water with me, but he don’t like to come out here, you know? Or he likes to, but you know, I guess he gets more of a kick out of it when it’s just me and him doin’ it, you know man. That’ pretty much inspires me and motivates me and the work that I do. Me, I’m trying to better myself. And then kinda help the environment too, a little bit, I try to get out a lot of these plants to a lot of people around here, do a lot of work around here, ‘cause a lot of people don’t know nothing about growing nothing, so I try to do a lot of that too, tell people about that. That’s one of my motivations now.

Q: Where are you from and how did you hear about Planting Justice?

Q: How did you become involved with Planting Justice?

Otis: Crazy story how I got into this job. So, a good friend of mine, his mama raised us, you know, we call her the mayor of Sobrante Park, and he ended up going to jail, and so by that…his mama, she always called me son too, you know…so he got life, so, she got tired of seeing me on the corner, she’d heard that I was working down there, I was selling dope. She made me get in the car and drove me down here. True story. I met Gavin there, he happened to be there, and he said, “Come to work tomorrow,” and I’ve been here I’ve ever since. And now it’s been what, two years, two more months ‘till two and a half years. I ain’t been on that corner ever since – selling dope – I’d probably get out there and hang a little bit, say hi, and run my mouth a bit. Ever since, though…that was a big one or me right there. That’s a good thing…so now I’ve got a garden in my backyard too, a nice one I built, from when they sent me to school – they [Planting Justice] sent me to school too. Gavin sent me to school, so I had a little training on that.

Q: What’s wrong with our food system and how is Planting Justice fixing it?

Otis: Oh, hell…food is just all fucked up man. I can tell you what’s wrong with it, it’s the way they grow it, the way they’re feeding us. I think, if you go more plant-based, you can’t go wrong with a plant-based diet. I tried it, I’m just a carnivore, so I really tried, I did. I gotta have some meat. I could eat a head of lettuce all day, and I don’t feel full, so…but I seen a lot of people who eat a plant-based diet and they look good, they look healthy to me. So, Planting Justice has been helping a lot of people. I’ve seen a man actually come in here and showed me a plant…I can’t think of that plant – it’s a plant that helps cancer, prevents cancer. Man, I think it was a seed berry. It was something we had that was rare, I can’t think of it, man, but I’m gonna come back to it. So a lot of these plants really help you with, you know, natural diseases and stuff. So kinda like that, that’s how Planting Justice fixes stuff. ‘Cause a lot of these plants a lot of people don’t got.

Q: If you were president, what’s the 1st thing you would change about this country?

Otis: I would paint the White House black.

Q: What’s your vision for Planting Justice in the future?

Otis: My vision for Planting Justice is to keep this [nursery] in Sobrante Park and kinda like…If I can’t reach everybody that I’ve been reaching, it’ll still be here, you know what I’m saying, as it goes on, it’ll keep reaching people. Growing your own food is really the way to go if you want to live long. That’s really my future. I want my son to be here, when I’m gone. I want him to come here and say “My dad built this,” you know what I’m saying? But that’s what my vision for it is.