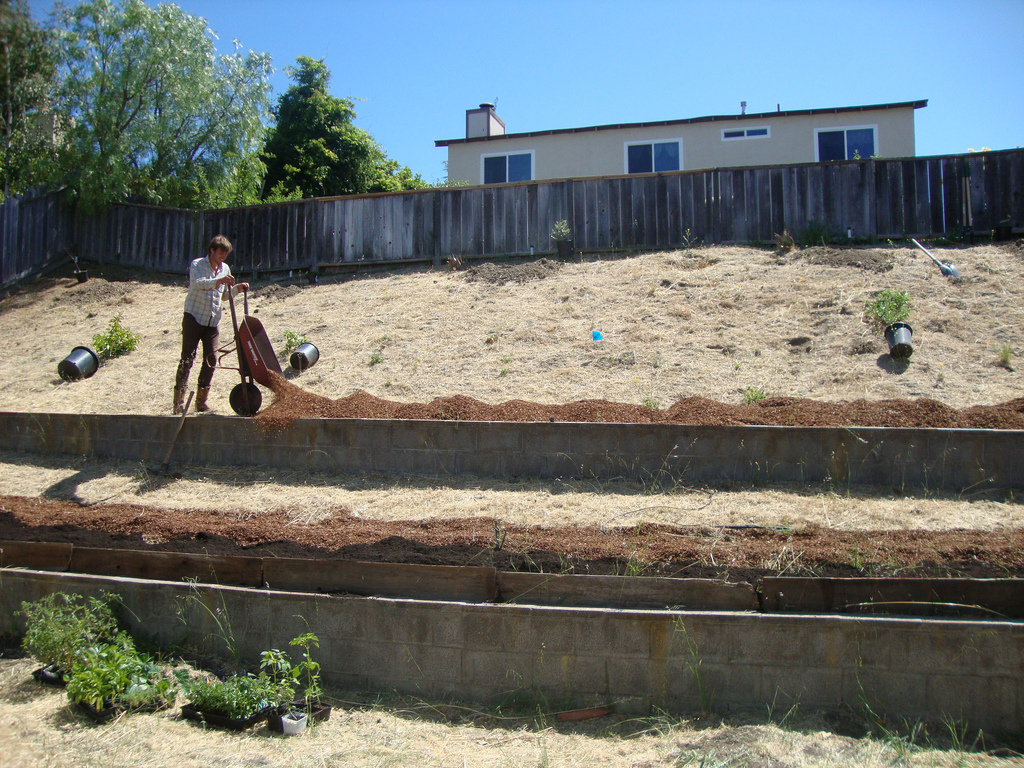 Rhubarb used to grow all throughout San Francisco – practically on every street you could find wild rhubarb.  When I dream about the 250 gardens Planting Justice has planted in the last four years, I seem to always imagine them as one, snaking across the Bay Area connected by a series of foot paths – a giant collective back yard.  Chris on 65th and Telegraph has the amazing asparagus patch and Jenny down the street has plenty of beats right now – come on over! 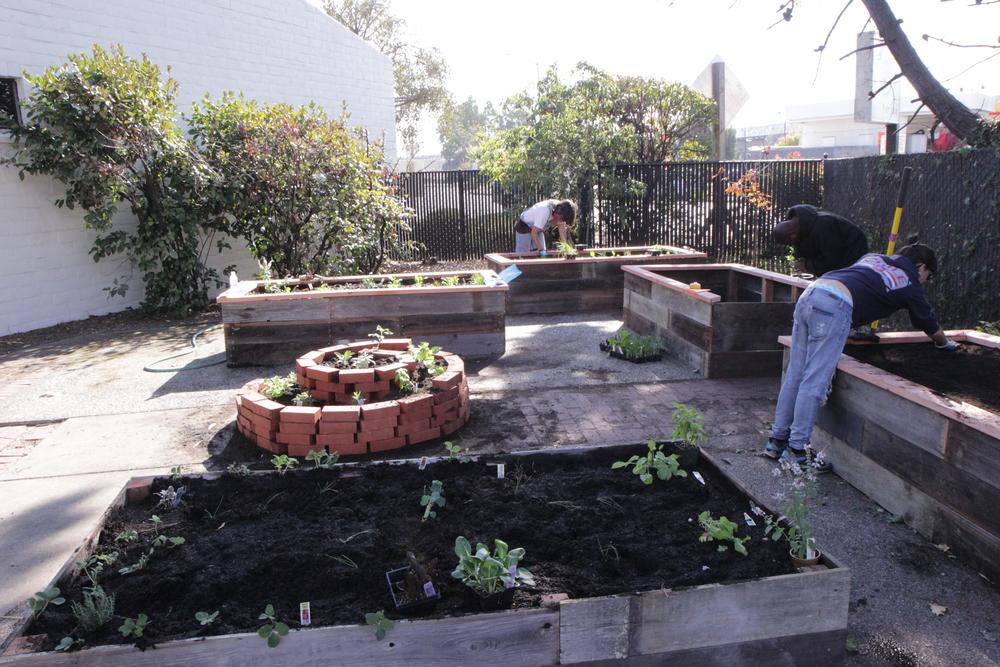 Building interconnectedness seems to be one of the most “illegal” or “legally threatening” things I can do to be an activist in this country.  In a country full of free gardens, backyard bounties, city rhubarb, it would become increasingly difficult for big agriculture business to survive.  Imagine if backyards hosted free theaters, medical clinics, classes!  But in this political reality, private property signs guard fallow urban lots, liability threats replace reasonable trust, building codes prevent sustainable alternatives and series of debilitating racist laws are codified to enforce strict lines of poverty.  Progress can be made politically, but I am rather impatient – and refuse to wait around for political change.  I am grateful for my shovel – or at this point my camera – documenting the edible gardens that Planting Justice builds is a constant reminder that vitally important work can begin now – in many communities – for very little investment.  I think starting with a shovel in your neighborhood’s backyards is a powerful tool for independence and a reliable path towards food abundance and neighborhood sharing.

My interest in food justice work is rooted in my fascination with the natural world, which all started with insects.  As I child I wouldn’t leave the house without a mesh bug net and a box to examine my multi-legged findings.  My constant fervor for the world of centipedes, cicadas and scorpions was my first conscious connection with the natural world.  I was fortunate, privileged and grateful that my parents had the time, money, space and motivation to take us on the many camping trips that laid the foundation for connection with nature.

While living in Oakland I started a rooftop nursery growing edible plants for neighbors – especially ones that were willing to host one of my 20 beehives that were spread out across Oakland!  During this time, Gavin and Haleh, the founders of Planting Justice, were canvassing door to door in Berkeley and Oakland looking for backyards to transform into permaculture gardens.  Gavin had an incredible roof-top nursery and we would trade plants, notes and food.  We both loved trying to grow weird perennials to see if they could survive the one or two frosts in the East Bay.  I was obsessed with the concept of Planting Justice from a biological standpoint.  Creating permaculture gardens akin to Bill Mollison’s vision in the Bay Area seemed ecologically brilliant – Grey water systems delivering water to mulch basins underneath apple guilds with artichoke plants for duff and comfrey to pull nutrients deep from the soil.  Organizing a garden in this cluttered, wild, and incredibly diverse fashion attracted me far more than monoculture rows. 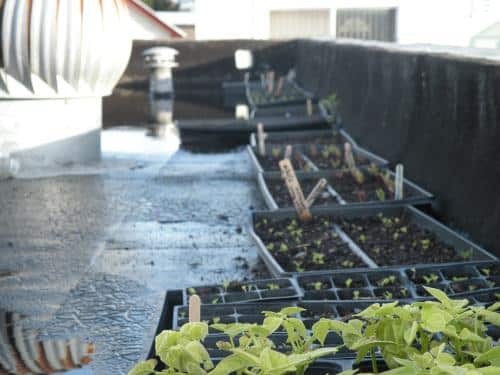 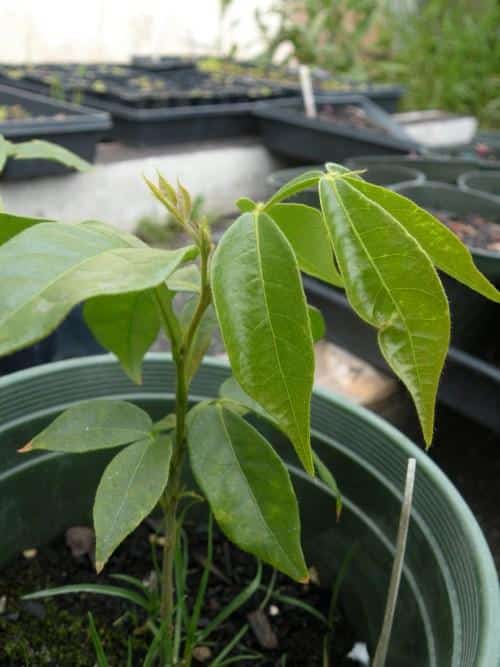 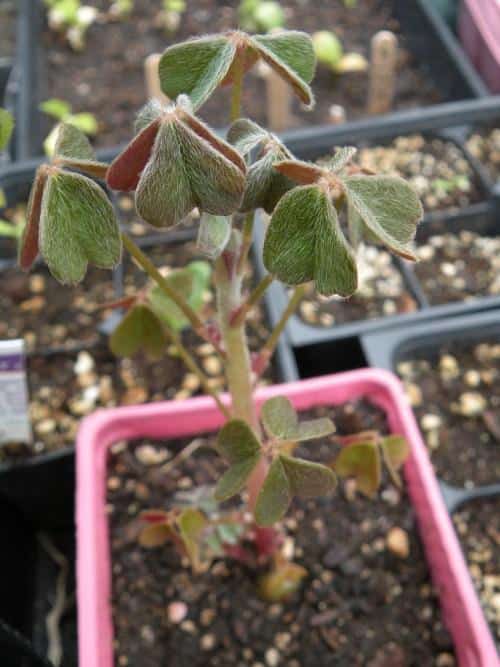 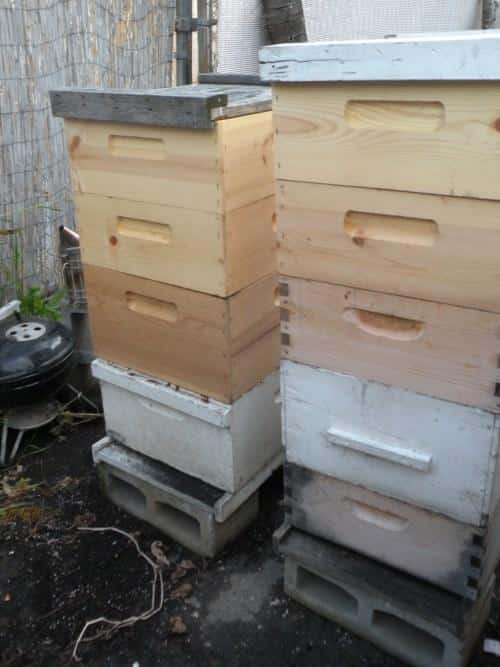 Since working with Planting Justice I’ve attended multiple anti-racism trainings, white privilege workshops and participated in Theater of the Oppressed trainings.  These learning experiences have been eye opening and have caused me to examine my own beliefs about urban regenerative work and gardening.  My role as an ally in the fight to improve food security in underserved neighborhoods seems to evolve and shift, the more I realize and contextualize my own privilege, and acknowledge that localized intra-community generated leadership is absolutely paramount for any real non-colonial progress.  It’s been a dialectic process working to discern my role, if there is one, in communities where I am a privileged foreigner, but I do know, that these experiences living with parades, carnivals, gun shots, liquor stores, trash, porch sitting, punks, art, ambulances, bullet proof bars, church, tradition, bolero music, factories, power plants, hurricanes, walking smiles,…. have been absolutely integral in my personal process of defining justice.

On Saturday, Julius and Eric, both former inmates at San Quentin State Prison who are in process of transition out of incarceration, worked eight hours building five raised beds for the City of Hope church in deep east oakland.  They are being paid a living wage of $20/ hour three days a week to build edible permaculture gardens.  They are community leaders, role models, fathers, pigeon trainers, hard workers, amazing listeners, creative minds and… and former prisoners.  It can be nearly impossible to find a job after being in prison.  It disgusts me, knowing the people that work with Planting Justice, how many other people of color are caught in a cycle of incarceration – typically for crimes of poverty – never seen as anything but “prisoner”. California has one of the highest incarceration rates and prison recidivism rates in the country – close to 70% of released inmates end up back in prison.  Eleven men have worked with Planting Justice in the last two years and none have returned to prison.  This seems to me to be a giant success – a small non-profit – fueled mainly by self-raised non-grant dependent funding – is effectively re-routing the prison industrial complex and in the process undertaking an immense amount of job training, community re-building and “Justice” work.  We are in a constant conversation with Parole Officers, wardens and judges trying to help our team transition and re-build their lives. 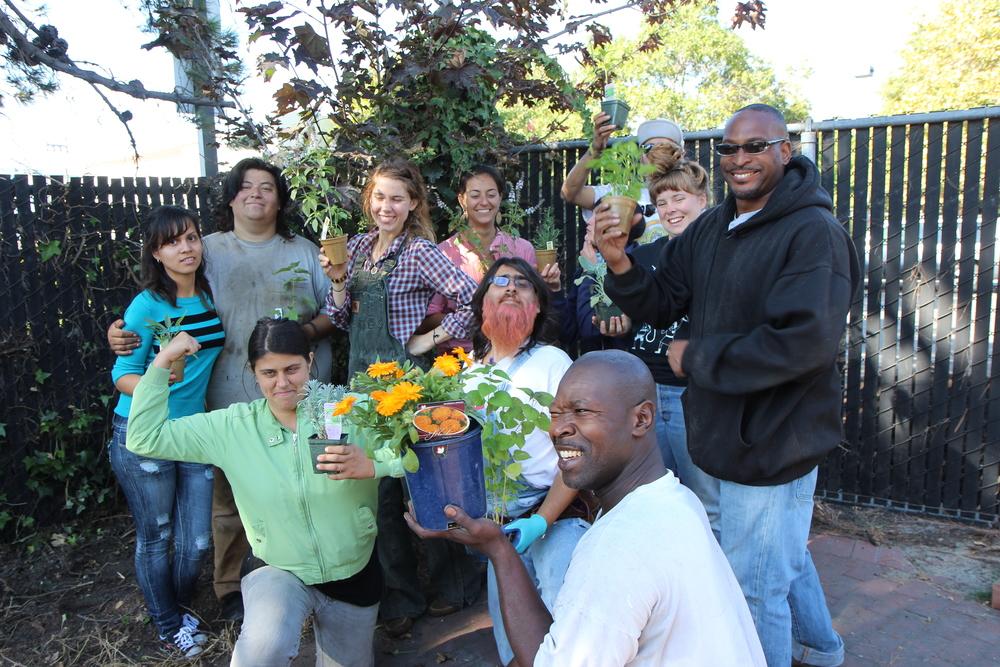 This to me, feels just.  In the San Francisco Bay Area which is increasingly drenched in tech wealth and elitism: in one afternoon I spent two hours discussing how to raise $700 for an employees mother’s uninsured x-ray and in the same afternoon I was touring a dot.com startup that was interested in me building a $2,000 tree fort in their office.  Both these worlds have elements of justice, fairness, equity – but it can be so hard to peek outside insular monocultures.  Gardens can be places where this overlap is encouraged and facilitated- it’s easy to gather around food and place, it feels like some of the last public common ground.

In a real way and scary way I don’t really believe in the longterm health of the city.  I know that I’m drawn to it – even of it – but I don’t believe that human beings can live very long in a reality that is so detached from production process.  Somewhere food is grown/made/packaged/shipped/sterilized.  It just seems so delicate to me not to have any responsibility in producing the very things that keep a human being alive – food, water, shelter, community….  The whole urban situation teeters – riding on the backs of billions of workers who barely make enough money to eat.  Cities couldn’t really exist without this extreme form of violence – the exchange of resources and labor for urban culture, something that is often more of an indoctrination than an invitation.  When communities stand up to defend their lively hoods, their relationships with land and place, their history – such as the Nigerian Delta Resistance Force – they are labeled as terrorists.  Implementing methods of food production that re-localize, re-prioritize inputs and re-connect communities with their surrounding land-base are important goals of mine.  Recognizing that a complete return to pre-modern food systems is in many ways unfeasible, I am searching for food production tools that are both ecologically sound and reduce the massive amounts of unseen violence me and my beloved community members partake in mostly unknowingly.

Lastly, and most personally, I choose to fight for food justice because it is a fight for mental health.  The soaring rates of depression, anxiety, adhd…. I think have so much to do with our diet.  Serotonin a neurotransmitter derived from the amino acid tryptophan when unavailable or in low quantities is often responsible for unipolar depression/anxiety.  Having lived with these labels off and on in my life, I was not surprised to learn that our gut has more serotonin receptors than any other part of our bodies.  This is where we harvest our dopamine, norepinephrine, Gaba….  Modern guts damaged by years of processed foods, candida growths, poor quality meat have become far less efficient at extracting these essential nutrients. Pharmaceutical companies posture themselves as the only long-term option for mental balance and clarity.  Western medicine doctors take one semester class in med-school on nutrition.  Although, I do not know what it is like to live outside my whiteness and class privilege – I certainly know what it feels like to be depressed or anxious.  These maladies/struggles have been incredibly defining for me and it is my belief that focusing on preventative, food based medicines will do wonders for mental health in this country.  For most of history – gardens have been our pharmacies.  At the most personal level Food Justice work for me is a tool to make people feel more connected, joyous and healthy in our big beautiful world.