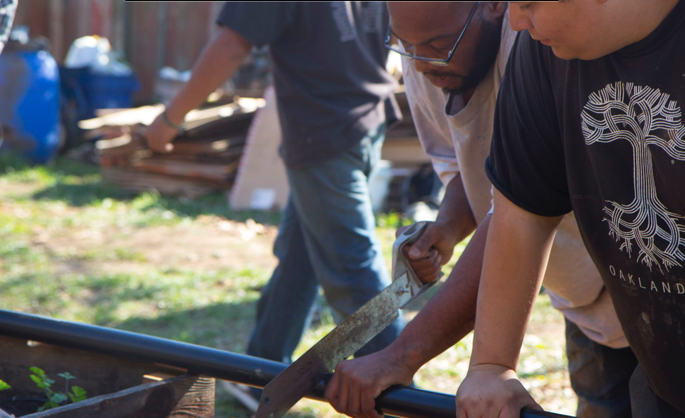 In response to the grand jury decision not to indict a Ferguson, MI police officer in the August 2014 killing of teenager Michael Brown, it was clear that Planting Justice staff members were angry and stressed. Back in September last year, our staff identified “Racism and Police Violence” as a form of oppression we wanted to address in our quarterly, day-long Workplace Justice trainings. After several months of Black Lives Matter direct actions taking place in cities across the U.S., Planting Justice staff members came together on a rainy day in January to dialogue about lived experiences of structural, systemic, institutionalized, and interpersonal racism, especially the impacts of police terrorism and the history of, as Angela Davis describes, “the unbroken line of police violence in the US that takes us all the way back to the days of slavery” (The Guardian: Dec 14, 2014).

The Planting Justice Education team prepared for this Workplace Justice training first by polling staff members on what they wanted to learn and discuss, gathering selections from news and scholarly articles that uplift the voices of people of color, and designing activities to explore the meaning and impacts of racism and police violence. Racism, both interpersonal and structural, can often be difficult to discuss, but obviously important in maintaining a safe and empowering work culture. Many Planting Justice staff members, as well as the community members we partner with in our work, are directly impacted by racism and the current “community safety strategy” of armed policing, which makes this training a fundamental investment in our non-profit mission. Furthermore, welcoming men in re-entry into the Planting Justice community has offered all of us at Planting Justice a more clear, tangible and confronting perspective of how our current model of policing effects people, families and communities.

At Planting Justice we continue to use restorative justice methods and the Be Present Empowerment Model to address conflicts and the ways that structural oppression impact our work culture. Once we gathered in the morning and had breakfast together, we dialogued about the meaning of race, ethnicity, cultural heritage, and nationality. One by one each voice was brought into the room as we shared how we self-identify, expressing complex ways of relating to the power of identity politics. Then we read aloud the definitions of whiteness, white privilege, and white supremacy (see the list of definitions used during the training below) and broke into pairs to share about our relation and reaction to these definitions. We then went through the differences between structural racism, systemic racism, interpersonal racism, internalized racism, “reverse racism”, and micro-aggressions. All these working definitions got us ready to break into topic groups. Staff members chose to join groups discussing “Alternatives to Policing and Incarceration”, “White Anti-Racist Practices”, “The Unbroken Line of Police Violence All the Way to Slavery”, or “Tactics and Strategies for Intervening Upon Structural/Systemic Racism” (see the selection of readings for each topic group below).

Planting Justice is a multi-racial, anti-racist organization, with that said we recognize that racism is systemic and internalized, meaning no anti-racist organization could be free from racism. That is why we needed this training and will continue to need to create space to address power and privilege. During the second half of our training, we made a high stakes attempt at creating a ‘safe space’ for people to anonymously and publicly address instances, patterns, and impacts of inter-personal and structural racism in our workplace. The reason we wanted to leave things anonymous is to try to tease out those experiences that power perpetuate itself by suppressing. Often times in the workplace setting power dynamics of who is in charge are maintained by hiring, firing and promotions which generally are decided upon by ‘higher ups’. This normalized workplace hierarchy, while seemingly inert, leaves employees afraid to speak out against interpersonal and systemic racism. So of course our facilitators had to make an attempt to remove the weight of confronting racism from the backs of those directly burdened by racism in the workplace and place the discomfort on our collective conscience. And it was weighty….as race and racism educator Dr. Ekua Omosupe shares ‘knowledge can be diss-ease’.

The success of our training could be measured by the unwillingness of our crew to end our discussion. Everyone felt committed to seriously unpacking racism as it operates within our organization and more broadly in our community. It is unrealistic to imagine we can ‘solve’ racism in our workplace with one training or even ten, but it is our responsibility to do our part.  The thirst for justice at Planting Justice was palpable, hey that’s what brought us together in the first place, and that is what will help our work community to stay together.

Please share with us other activities you’ve participated in to learn about racism, police violence, and the vital work of anti-racism. What is your ‘investment’ in anti-racism?

Here are additional resources from the Workshop:

Alternatives to Police and Incarceration HANDOUT

← Prev: A letter from Patrick about the importance of letter writing and Planting Justice Next: September on the Farm →